There has been an awful virus roaming around the Dominican Republic that has found its horrid place in the Dominguez household! Some of its symptoms include body aches, high fevers, conjunctivitis, severe headaches, diarrhea and vomiting.

As many of you know, Starr suffered from a rare form of epilepsy some time ago. She has been seizure free for two years and off medication for a little over a year. Monitoring the side effects of the medication kept us busy. We were so overwhelmed with what the medication caused that we asked her neurologists in Dallas to discontinue the medication. He agreed, but he did tell us that if she had one more seizure, regardless of the trigger, she would need to go back on the meds.

I’m so sad to say that the disgusting virus caused her to have a fever that we could not control at home. We tried very hard with acetaminophen, cool baths, cool rags all over, lots of fluids and everything else we thought of to take a fever down; all to no avail. On the third day of her fever, she began to act abnormal. I knew that it was the fever, so I didn’t worry too much. She was hallucinating and talking about things that were actually funny and made no sense. She kept saying that the house was spinning and she just wanted to sleep. So we took turns lying down next to her all day and trying our best to fight the fever.

Jr. and Josiah were packing for a long awaited trip with Selina back to VA to spend some time with their brothers and grandparents. I felt guilty for not helping them pack, so I asked someone else to watch Starr while I checked Josiah’s bags and school books. As I piled the books into his suitcase, I had a strange urge to check Starr.

I ran into the room and witnessed her having a seizure. Fear gripped me, but I resisted and prayed. Ruben was in the city with the van and our jeep is out of service. My first thought was, “How am I going to get her to the hospital?” Then I remembered that Selina’s friend was here visiting to say goodbye, so I asked him to wrap up his visit and to take us to the emergency room.

Starr had two more seizures in the emergency room.

We all knew that the fever triggered the seizures. Starr’s system is rare. Vomiting, diarrhea, dehydration and transition have all caused her seizures in the past. This night, she had suffered from all of the triggers. Selina was going back to school, Jr. and Jojo would be gone for a while, she had vomited and had diarrhea, she was so dehydrated that we could see no pink on her white tongue.

Since she was hospitalized at that hospital in the past and her neurologist is on staff there, it was easy for the emergency room doctors to take care of her. She was quickly admitted.

She had two more seizures after being admitted, then the undesired medication was administered.

The seizures stopped. She was out of it for a day. The next day she began to wake up. By the third day, she was crying to go home.

She is now home. She is walking around the house singing songs like, “Arrebato” which is a Spanish song that speaks of taking back everything the enemy stole, like your health. She is singing, “We Have Come and Bless the Lord” by Will Reagan. She is now sitting on the sofa memorizing Isaiah 61 with Kristian (our precious intern who is way more than an intern). I even heard Kristian tell her to stop running this morning!

She is doing better. Keep praying for her. Pray against the side effects of the brain altering medication that she has to take. Please pray for complete healing so that she won’t have to take those meds anymore.

God has done amazing things for this special princess. I know that He Is NOT finished yet! 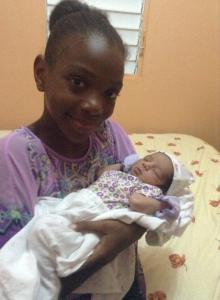 As a believer of Jesus Christ, I purpose to follow Him into the darkest places so that His light can shine the brightest. I'm on a mission to shine His light to all who cross my path. View all posts by Vicki Dominguez

1 thought on “The Resurgence of Starr”